Building Behavioral Design Skills: Conversations with Breakthrough ACTION Innovators
Blog
Work for Good: Turning Hours at Work into Dollars for Impact
Blog
How Do You Plan for the Future When the Value of Money Has a Time Limit? Initial Insights from Cash Transfers in South Sudan
Blog
A Look Back on 2021: 5 Behavioral Science Takeaways
Blog

ideas42’s network of academic affiliates represent some of the world’s foremost experts in behavioral science. With the ideas42 Affiliate Series, we invite leading scholars to share their insights and what inspires their exploration into human behavior. 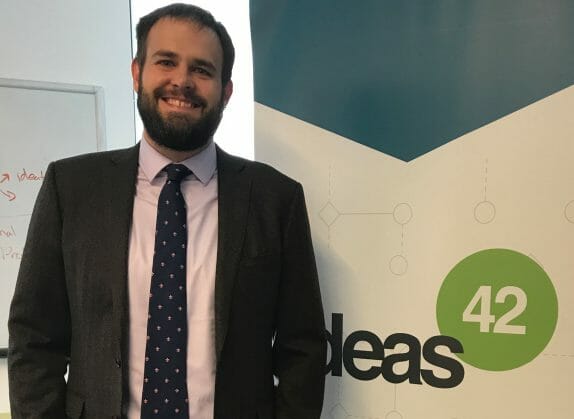 Our New York office was pleased to host Christopher Bryan of the University of Chicago Booth. Christopher studies psychological influence, behavioral decision-making, and political psychology with a particular interest in psychology as it relates to social and public policy. His research spans a range of theoretical interests and is driven by a core motivation to do work that enhances our understanding of and ability to address important real-world social, political, and policy problems. Much of his work has examined how subtle framing manipulations can change people’s attitudes and behavior in ways that benefit them, their communities and the larger society. A major theoretical theme of Christopher’s work is the role of the self in influencing attitudes and behavior. After giving a talk to the ideas42 team, Christopher was kind enough to share some of his thoughts on behavioral science:

What drew you to behavioral science?

I’m a social psychologist by training and a pretty clear case of the old cliché about how academic psychologists “study their own problems.” Most of my work is about how to get people to do the things they know they should be doing but often don’t bother—or can’t motivate themselves—to do. Things like making responsible financial decisions, exercising regularly and avoiding junk food, giving to charity, etc. These are things I care about and struggle to get myself to do. Behavioral science affords a powerful lens through which to have insights about how to help people with these sorts of struggles. And my secret weapon is that I have no trouble empathizing with people who struggle with these issues.

What’s one of the most surprising discoveries about human behavior?

Surprising is a tricky standard. But I think one of the biggest “aha” moments I ever had was the realization that the desire to see oneself as “the right kind of person” is a major driver of a lot of our important decisions and behaviors. Do we volunteer for charity, help out a neighbor when they need it, go for a run when we’re not in the mood, go to a demonstration about an issue we care about—do we do the thing that’s good for us or good for others, even though it’s hard? Or do we opt for ease, comfort, and convenience instead? I believe an important reason we sometimes choose to do the hard, good thing is that we like the way doing those kinds of things allows us to see ourselves. Practically, this suggests a way to motivate this sort of behavior: by emphasizing its implications for how a person could think of themselves if they did it—as a charitable, giving person, as physically and mentally strong, as someone who stands up for social justice. My collaborators and I have found evidence that, under the right circumstances, this approach can be very effective. For example, referring in a pre-election survey to “being a voter” (which emphasizes the actor) rather than to “voting” (which emphasizes the action but not the actor) can increase the likelihood that people will actually go to the polls on Election Day.

Tell us about your work in studying behaviors that drive social and public policy and their outcomes.

Lately, I’ve been focusing on a new line of thinking that I think has a lot of potential to move the needle on a range of behaviors that have vexed policy makers for a long time. The question of how to get people to exercise their personal discretion in ways that benefit them, their communities, and the broader society is one of the biggest challenges policy-makers wrestle with. Good, scalable answers to this question could yield huge improvements in health, wealth, and well-being around the globe—ameliorating such daunting problems as people’s failure to save adequately for retirement, the obesity epidemic, persistent poverty in the developing world, and climate change to name some.

The promising angle I’ve become increasingly excited about is something my collaborators and I call “values alignment.” In a first instantiation of this approach, developmental psychologist David Yeager and I, along with a team of talented students, have been working to develop a novel approach to motivating adolescents to adopt healthier eating habits. It’s a tough challenge; many have tried and failed. David and I suspected that one of the reasons for past failures is that past interventions have tended to rely, implicitly or explicitly, on the assumption that the desire to be healthy in the future is an effective motivator for teenagers. There are plenty of theoretically and empirically supported reasons to doubt the validity of that assumption but all you really need is a little bit of experience with teenagers to know it’s wrong. So, instead of trying to get teens to care about something they don’t really care about, we decided to re-frame healthy eating so it would be aligned with their existing strongly-held values.

Teenagers are notoriously rebellious against adult authority figures. Less well-known but often equally important to them is a concern for fairness. So, we taught them how healthy eating serves these widely-shared adolescent values. We taught them about how the powerful adults in the food industry spend millions of dollars on deceptive marketing aimed at getting them to eat junk food. We also told them about how, worse than that, the industry purposely targets vulnerable populations—very young children, poor people, and minorities—with marketing of the unhealthiest junk foods; getting rich by harming the health of those who are least able to protect themselves. Re-casting food industry executives as the controlling authority figure perpetrating social injustice, we were able to transform teenagers’ thinking about healthy eating. Healthy eating felt less like just doing a boring thing your parents and teachers tell you to do and more like a way to take a symbolic stand against unjust adult authority. It got them to make healthier choices the next day in a different situation where they didn’t think we were watching them. We think, with the right supporting psychology (which we’re working now on developing), this approach can lead to lasting changes in eating habits that feel meaningful and worthwhile to adolescents.

It’s given me a healthy appreciation of the limits of current theory in behavioral science. Our field has generated an incredible wealth of important and powerful theoretical insights that offer clues about potentially fruitful solutions to policy problems. But the theory we’ve built so far often doesn’t go much farther than offering clues. In my opinion, we have not yet done an adequate job of fleshing out those theories in ways that would provide solid, reliable guidance to practitioners seeking to implement our ideas. The development of more robust, useful theories like that would require a much greater emphasis on testing how theories play out in a wide range of contexts; we need to venture out of the lab much more often. Without doing that, it’s very hard to know whether the seemingly important findings we have uncovered really do have the profound social and policy implications we often so casually suggest they have in the opening and closing paragraphs of our journal articles. I think this is one of the most important ways in which behavioral scientists can make a meaningful contribution to both theoretical understanding and practical problem-solving, and I have increasingly been dedicating my effort to this work.