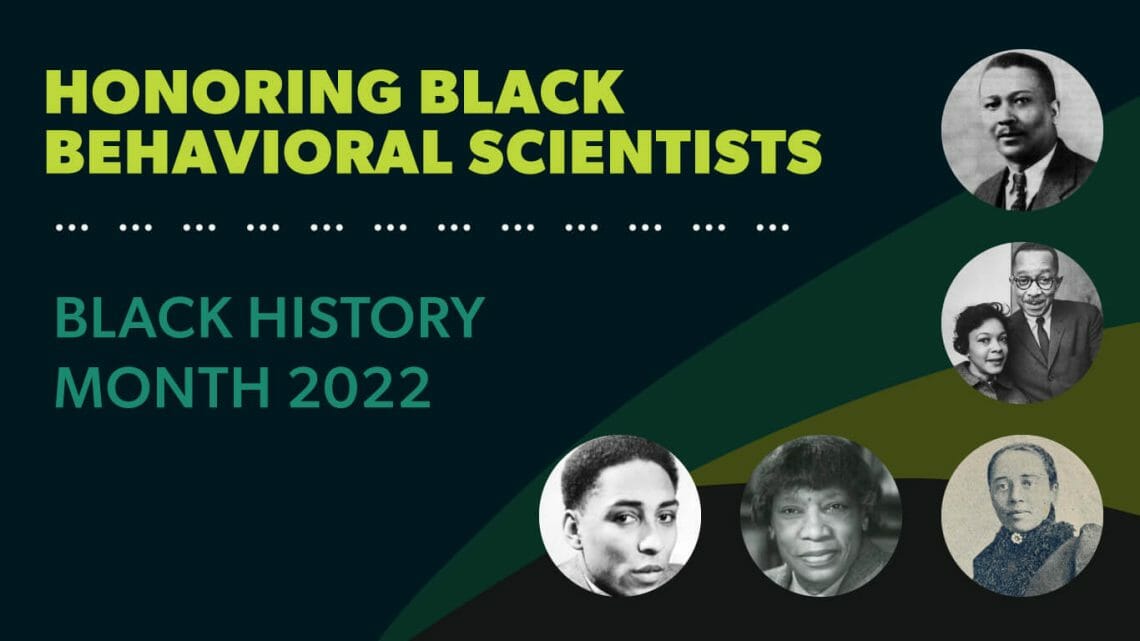 In the U.S., Black History Month is a time to reflect on the contributions made by Black people in all walks of life, across all industries and in all parts of our society. It’s also a time to celebrate and amplify the voices of those in the Black community and reflect on those who inspire us, or are engaged in history in the making. This celebration should include our field, behavioral science, which is an amalgamation of economics, psychology, sociology, anthropology, neuroscience, and more. Across these fields, there are a number of Black researchers and practitioners who are not as well-known, and as with much Black history in the U.S., they have not received the recognition for their work that they should. This is more evidence, if we needed it, that even those studying human biases (including ourselves) are still subject to bias.

Behavioral science has also made significant contributions to understanding the causes and sources of discrimination and conscious and unconscious biases, as well as discovered additional ways to fight discrimination and biases. Highlighting the Black people who have contributed to our field, as well as research that can continue to be applied, is a small step in our ongoing commitments to racial justice and correcting historical injustices.

That’s why throughout the month of February, we’ll once again use our Twitter feed to shed light on Black researchers, thought leaders, and practitioners who contributed to the advancement of the different disciplines that comprise the behavioral sciences, but who have been less recognized publicly for their achievements that make our work at ideas42 possible. We will tweet about historical figures throughout the month, as well as highlight research that either deepened our understanding of discrimination or bias, or were used to create ways to fight them. Both will be updated on this post with a growing list below.

We invite you to reach out to us @ideas42 to share additional historical figures or research. We also encourage you to read our previous Black History Month blog examining the psychology of race in history.

Dr. Phyllis Ann Wallace studied workplace economics and discrimination in the workplace. She was the Chief of Technical Studies at the Equal Employment Opportunity Commission, and she was a professor at MIT’s Sloan School of Management–the first woman to gain tenure there. Read more here.

Dr. Albert Sidney Beckham was a psychologist who focused much of his research on education. In a 1933 study, he showed that intelligence test scores and social-economic status were significantly correlated. As a professor at Howard University, Dr. Beckham founded a lab that conducted research on and refuted claims made in mainstream psychology about the intellectual inferiority of Black children. Read more here.

Dr. Anna Julia Cooper received her PhD in History in 1924 and made contributions to sociology and other social science fields. Her first book, A Voice from the South: By a Black Woman of the South, is widely acknowledged as one of the first articulations of Black feminism. As such, Dr. Cooper was often known by the title, “the Mother of Black Feminism.” Read more here.

Dr. Herman George Canady worked to increase educational opportunities for Black students. One of his most significant contributions was his study on the role of an IQ test examiner’s race on test results: He found that rapport between the examiner and test-taker could impact test scores. He was chair of the psychology department at West Virginia State University for forty years. Read more here.

Dr. Carolyn R. Payton was a professor of psychology and was very active in the American Psychological Association, serving on several committees. She received the APA Award for Outstanding Lifetime Contribution to Psychology for her “dedication to using psychology to promote better cross-cultural understanding and to end social injustice by influencing political process…” She was also appointed Director of the Peace Corps in 1977. Read more here.

Dr. Samuel L. Myers Sr. was among the first Black Americans to receive a PhD in economics from Harvard University. Myers served as president of the National Association for Equal Opportunity in Higher Education (NAFEO) for 18 years. Under his leadership, NAFEO lobbied President Jimmy Carter and Congress to pass Title III of the Higher Education Act, which secured billions of dollars in funding for historically Black colleges and universities. Read more here.

Known as the “Father of Black Psychology,” Dr. Francis Sumner was the first Black American to receive a PhD in psychology. His work focused on understanding racial bias and supporting educational justice. Dr. Sumner was also chair of the psychology department at Howard University for more than 25 years. Read more here.

Dr. Mamie Phipps Clark was a psychologist who conducted her master’s thesis on self-identification in Black children. She and her husband Kenneth Bancroft Clark then continued this work together, using dolls to study the effects of segregation on Black children. They testified as expert witnesses in Brown vs. Board of Education and other school desegregation cases. Read more here.

Dr. Kenneth Bancroft Clark was a psychologist and the first Black president of the American Psychological Association. He and his wife Mamie Phipps Clark opened an agency called the Northside Center for Child Development, the first full-time child guidance center offering psychological and casework services to families in the Harlem area. The Clarks made significant contributions both in their field of psychology and in the Civil Rights movement. Read more here.

Dr. Linda Datcher Loury was a Professor of Economics at Tufts University and was a pioneer in social economics. Dr. Loury conducted influential research on areas such as how grandparents’ educational achievements impacted their grandchildren, the relationship between job tenure and hiring networks, and the impact of mothers’ labor market participation on children’s academic achievements. Read more here.

Dr. John Gibbs St. Clair Drake was a devoted academic and anthropologist. Drake spent more than two decades conducting research as a professor at Roosevelt University and later founded the African and African American Studies program at Stanford University, among the first such programs in the U.S. One of his most celebrated works is his co-authored book, Black Metropolis, which studied the urban experience of Black Americans living in Chicago in the early 20th century. Read more here.

Dr. Charles S. Johnson dedicated his career to the study of race relations and served as the first black president of Fisk University. Johnson was integral to the implementation of the Brown v. Board of Education (1954) decision in the South and contributed to the effort to pass federal civil rights legislation. Read more here.

Dr. W.E.B. Du Bois was one of the foremost voices of the Civil Rights Movement. In his first major academic work, a book called The Philadelphia Negro, Dr. Du Bois undermined stereotypes about Black neighborhoods in Philadelphia using empirical evidence. It was the first case study of a Black community in the U.S. and a major contribution to the field of sociology. Much of his work also examined the U.S. government’s failures during Reconstruction, which ultimately led to the greater structural racism that prevailed throughout the 20th century. Read more here.

Dr. Robert Williams published more than 60 works in his career and was a founding member of the National Association of Black Psychologists, serving as the organization’s second president. Williams criticized racial and cultural biases in IQ testing. His work refuted racist assumptions of Black Americans in mainstream psychology. Read more here.

Dr. Katherine W. Phillips was a business theorist whose research focused on diversity, the workplace, and the value of racially and ethnically diverse groups. Phillips became the first Black woman to receive tenure at the Kellogg School of Management at Northwestern University and later served as senior vice dean and the Reuben Mark Professor of Organizational Character at Columbia Business School. Read more here.

The American Psychological Association (APA) described Dr. Robert V. Guthrie as “one of the most influential and multifaceted African American scholars of the century.” In his book, Even the Rat was White: A Historical View of Psychology, Guthrie recognized the significant and often overlooked contributions made by Black psychologists. The book also disproved prior biased research that drew racist conclusions about Black people. Read more here.

Dr. J. Frank Yates was a devoted researcher whose work evaluated cognitive processes in judgments and decision-making across several contexts. Yates helped establish the National Association of Black Psychologists, produced more than 100 publications, and served as a professor at the University of Michigan for more than 50 years. Read more here.