Changing Narratives Around Care Work in Argentina and Beyond 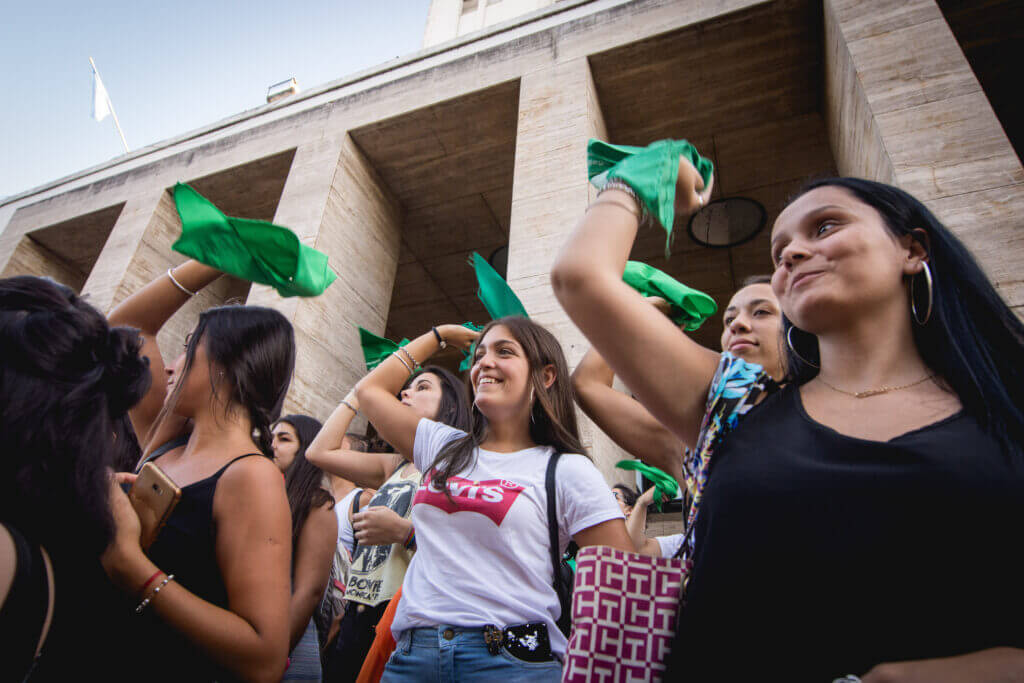 Achieving gender equity doesn’t require better arguments or more evidence, it needs new narratives. Last year, Argentina’s marea verde, or green tide, delivered a sweeping abortion reform, moving the needle in favor of gender equity in a society that’s still influenced by prevailing Catholic values and norms that stigmatize a woman’s right to choose. Millions of Argentinians took to the streets to celebrate the landmark bill, and its rallying cry: “educación sexual para decidir, anticonceptivos para no abortar, aborto legal para no morir,” (or, ‘sexual education so we can decide, contraceptives so we don’t need abortions, and legal abortions so we don’t die’) inspired feminist movements and other civil society groups working for increased women’s rights throughout the region. But despite recent wins, Argentina, like many countries, is still far from achieving equal rights for women, and narratives are a part of why. In the first of a two-part series, I’ll start to unpack some of the behavioral barriers at play.

Why is the political economy for issues impacting women’s rights and equal standing in society so difficult to shift in Argentina? Our Economic Justice team’s work changing narratives around poverty in the U.S. suggests that to unlock the kinds of policies and programs that promote equity and dignity, we need to uncover and dismantle the often false and harmful stories we hold about each other. Just as we unconsciously hold narratives around poverty and how it happens, we all have a powerful, unconscious script about what women should or should not do, what women deserve, and even what it means to be a ‘good’ mother. How we define womanhood may be based on what we’ve seen in our families or in popular culture and movies. I personally come from a Venezuelan family with very traditional gender roles – my father is the breadwinner and my mother stayed at home to raise me and my sisters. This seemed so normal that I didn’t question that division of labor until well into my 20s.

We see the same gender roles play out in mainstream media: in 2017, among the 100 top-grossing films globally, male characters were more likely than females to have work-related goals (41% vs 34%). And between 2006-2009, not one female character in films marketed towards people of all ages was represented as a business leader or in professions with stringent education and certification requirements such as medicine, law, or politics. Given all the signals we get about gender and work, and the narratives underpinning them, it’s no wonder we internalize ideas about what’s ‘normal’—sometimes without even knowing it.

At ideas42, we believe that as long as we hold onto prescriptive, false narratives about what types of jobs women should or shouldn’t do and even what constitutes ‘work’, women’s labor will not be valued equally, and therefore their place in society will not be equal. To begin the hard work of changing false and deeply embedded narratives, we partnered with the International Labour Organization (ILO) in Argentina. We had two goals: first, to uncover the narratives that drive an unequal distribution of unpaid care work. Second, to design a social norms intervention to dismantle those narratives and replace them with new, more accurate ones that reflect the experience of women in the real world.

We started by exploring how gender inequities around care work manifest in Argentina. The context is bleak: care work—activities that strengthen the health, safety, and emotional wellbeing of others—is invisible because it happens inside the home and is largely shouldered by women. Because it is invisible, it is also unpaid and undervalued, creating a vicious cycle that keeps women from making money for their labor while often excluding them from many paid economic opportunities. Indeed, we assign economic value to this work, it translates to more than 15.9%  of Argentina’s GDP with women contributing 76% of that effort.

It also deepens income inequality. Women with higher socio-economic status can afford to pay for private care services and on average report spending three hours per day on care work while women living in poverty don’t have the option to externalize care—whether public or private—and are often forced to shoulder unpaid but important ‘community work’ like running neighborhood kitchens, taking care of neighbors, friends, or cleaning shared spaces. This is in addition to the family household work, where many women spend up to eight hours on childcare and housekeeping activities. This depresses economic mobility by increasing time scarcity on top of resource scarcity and toxic stress for women living in poverty, keeping them from joining the workforce and improving their livelihoods.

We began to explore the narratives that create the conditions we uncovered in Argentina through an online survey with 1,010 respondents, and 15 in-depth interviews with adults that had at least one child in the province of Buenos Aires. We found there are clear ideas about how people conceptualize care and motherhood that get in the way of an equal distribution of care work in households:

If we can shift how people conceptualize care from altruism to true work, as well as shift our mental models from masculinity being antithetical to care and femininity making someone an ideal caregiver to shared and equal responsibility, we can unlock the ability for women to achieve the same agency over their lives as men. Specifically, women would be able to enter and participate in the workforce meaningfully as they choose, achieve financial autonomy, and prioritize caring for themselves and living meaningful lives of their own choosing.

In the next post, we’ll share how we co-created behaviorally-informed designs to begin to counter these narratives and reshape social norms in Argentina with ILO, civil society organizations, UN agencies, and other stakeholders in the country. Our hope is that we can contribute to the ongoing efforts by ILO and others that foster an equitable distribution of care work, allowing women to have the time they need to take care of themselves, join the labor force, or just watch a movie in peace (hopefully with a female protagonist that is fulfilled by more than her romantic relationships).