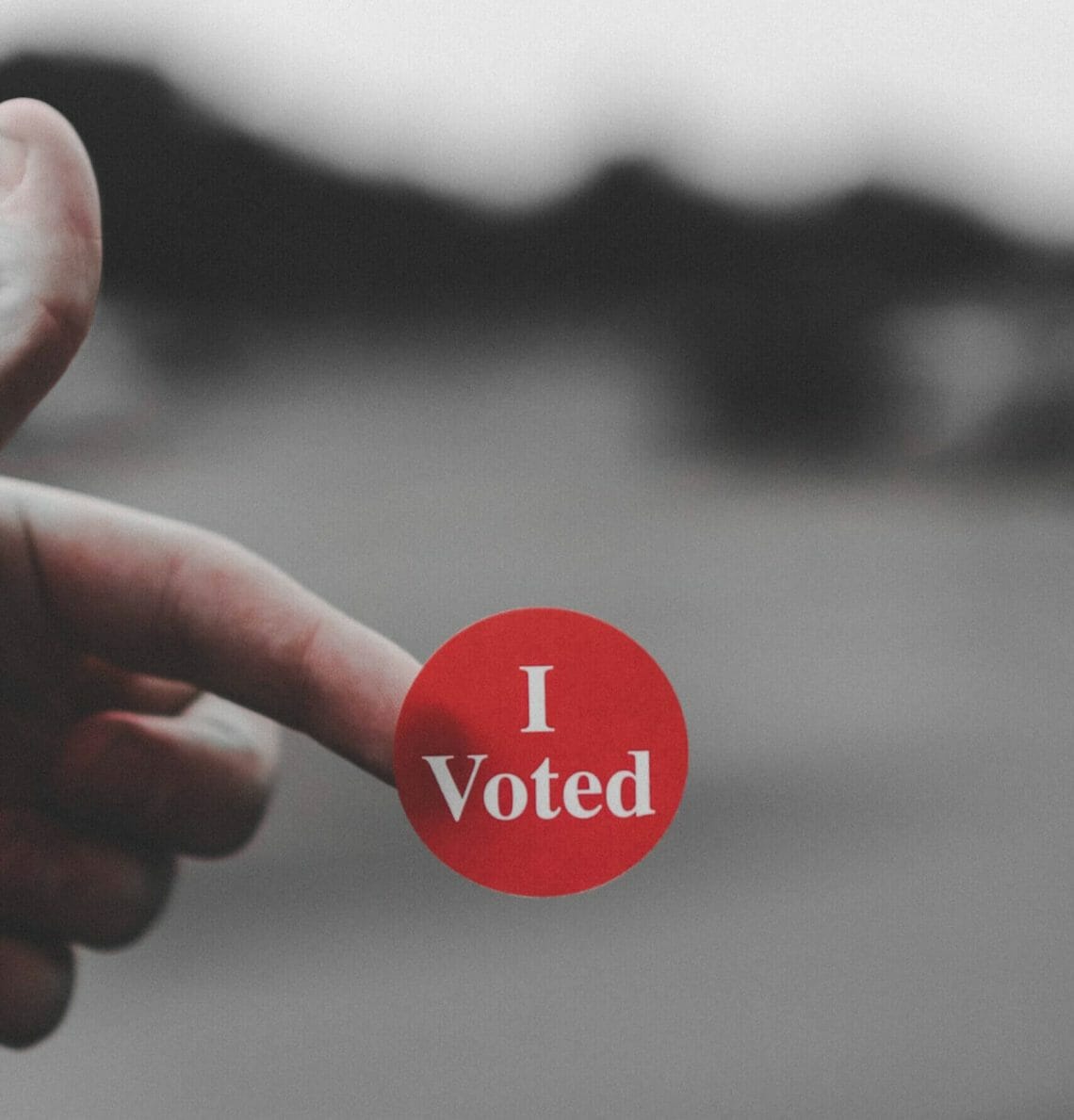 In the decade since becoming eligible to vote, I’ve moved seven times across four different states. Along the way, I’ve prided myself on re-registering with each move and doing my best to get familiar with my new elected officials. But despite the fact that my job literally revolves around elections, I still struggle like most Americans when it comes to voting in local elections and down ballot races during higher-profile elections.

When my city recently held a ballot referendum over building a new high school, I felt completely out of my depth. I only learned about the race a week before election day and I had trouble making sense of what we were being asked to vote on. The handful of articles I found felt incomplete and had agendas that were difficult to decipher. Talking it out with my fiancé, we debated whether it was even our place to weigh in since we didn’t have deep roots in town or plan to raise kids here.

As I attempted to untangle what a “yes” or “no” vote meant, the fear of getting it wrong loomed large, especially since the consequences would be borne by people already marginalized within the community. While the city I live in is overwhelmingly white, the high school primarily served Black and Latino students. The demographic mismatch between the school system and the voting population forced me to consider the potential equity impacts of the referendum even more deeply.

Although I ultimately made it to the polls for that referendum, millions across the country sit out similar elections every year, with turnout in local elections often struggling to crack 30%. Some simply never hear about these low salience elections, while others drop off somewhere along the way between setting an intention to vote and actually voting—especially if they lack the time and resources to navigate the process. While conventional wisdom is quick to ascribe low turnout to voter apathy, the reality reveals a much more complicated picture. 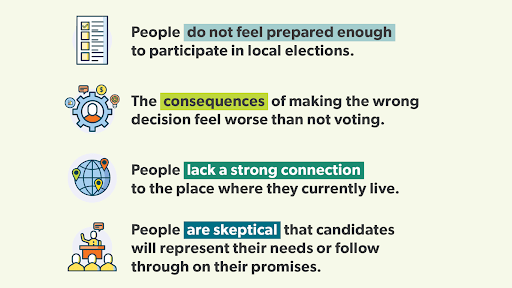 Over the past year, ideas42 partnered with Democracy Works, the makers of TurboVote, to learn more about the barriers to voting in local elections. Given our organizations’ shared goal of increasing the representativeness of local electorates, we paid close attention to barriers that were particularly pronounced among voters who are traditionally underserved by elections infrastructure, especially communities of color.

With the help of voters in New York City, Detroit, Boston, Atlanta, Richmond, and New Orleans, our team uncovered four key barriers to participation, which we detail in our new report Voting Local: Promoting More Equitable Participation in Local Elections. We then delivered over 85,000 custom text message notifications to TurboVote users in our target cities to tackle these barriers head on.

The barriers we uncovered provide important nuances for how people’s desire and ability to vote in local races are commonly undercut. For instance, we found that many people disengage from local elections because they lack a strong connection to the place where they currently live or are skeptical that candidates would reliably represent their needs. We found these sentiments repeated even by those who otherwise were eager to participate in national elections for high-profile offices like the President, even though local races often have a more direct impact on their day to day lives. Like me, they were transplants or had strong preconceived notions about who local elections were meant for. Their image of the “typical” local voter was often of an older person who owned their home and had kids in public schools.

Of course, there are those who intend to vote in every election who still struggle to follow through. We heard reports in every city that people do not feel prepared enough to participate in local elections and as a result the consequences of making the wrong decision feel worse than not voting. Contrary to popular belief, almost everyone we spoke with had an intuitive understanding of how important local elections were to their daily lives. They felt that choosing “correctly” was in fact so important that it was less risky to sit out all together than risk voting in a way that caused harm to their community. One man in Atlanta captured this do no harm ethos poetically when he told us a local race, “has a more direct impact, and you don’t know if you’ve led the snake into the garden. You like the wrong politician, and suddenly your waters are polluted.”

While a typical voter outreach campaign may go all in to convince voters about the stakes of the election, if they don’t properly support people by connecting them to simple, actionable, and resonant resources, then they risk demobilizing voters by amplifying the consequence of making the wrong choice.

With the 2022 midterm election cycle officially underway, these insights are critical to help understand how voters across the country are approaching the decision of whether or not to participate, especially in lower salience contests. As organizations and campaigns craft their voter outreach strategies, the insights outlined in Voting Local can help people communicate more effectively with voters and avoid some common pitfalls that may inadvertently hamper their efforts.

Interested in learning more about our efforts to apply a behavioral lens to increase voter turnout and by extension the representativeness of our democracy for all? Reach out to us at omar@ideas42.org