By Maddie Kau and Sara Flanagan 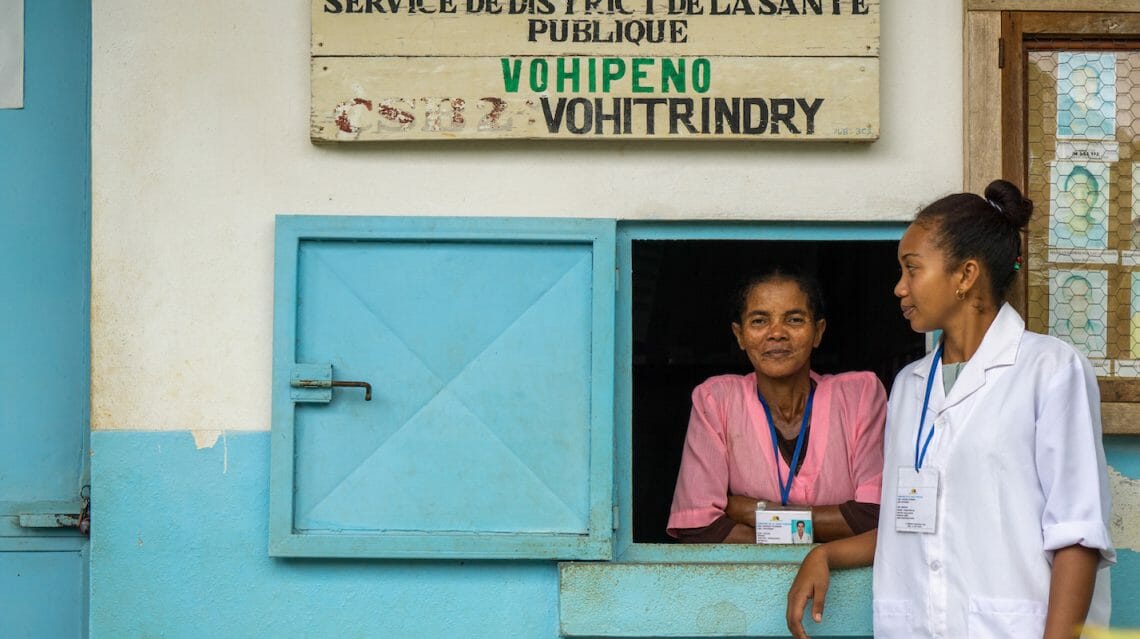 Worldwide, what is more likely to kill you than 200 skydives, 1000 scuba dives, or a diagnosed case of malaria? Giving birth once.

Too often, giving birth is dangerous, and the most common cause of maternal mortality – postpartum hemorrhage (PPH), or excessive bleeding after childbirth – is largely preventable. The clinical best practices to prevent and manage PPH seem simple enough: administer oxytocin immediately after delivery; monitor frequently to detect any bleeding early; manage the source of the bleeding accordingly; and if the provider cannot stop the bleeding, promptly refer the patient to a higher-level facility for surgery or a blood transfusion.

When compliance with these best practices falls short, a common strategy used to improve health workers’ decision-making and adherence is to provide more training. However, simply giving people access to more information rarely changes behavior, and these trainings typically do not consider the extremely resource and time constrained environment that they often work in. For health workers in many contexts, like rural Madagascar, following PPH best practices is far from simple.

For the past year, as part of the USAID-funded Breakthrough RESEARCH project led by the Population Council, we at ideas42 have learned about the extraordinary constraints that Malagasy health workers must face to save mothers’ lives. Basic care facilities are often only staffed by a midwife, who is responsible for myriad tasks, from delivering babies to treating malaria, administering child vaccinations, and more. To serve more of the population, many facilities are remote, sometimes accessible only by canoe when roads are washed out, and there is no one else available to give guidance or a helping hand if complications arise. Babies are often born at night, making it impossible for a health worker to sleep (affecting her ability to stay alert and do her job during the day) if she follows the monitoring protocol to regularly check the mother for bleeding. Facilities often have no running water or electricity, so working alone at night is even more difficult—it’s hard to deliver a baby or check for bleeding with just a cellphone’s flashlight. 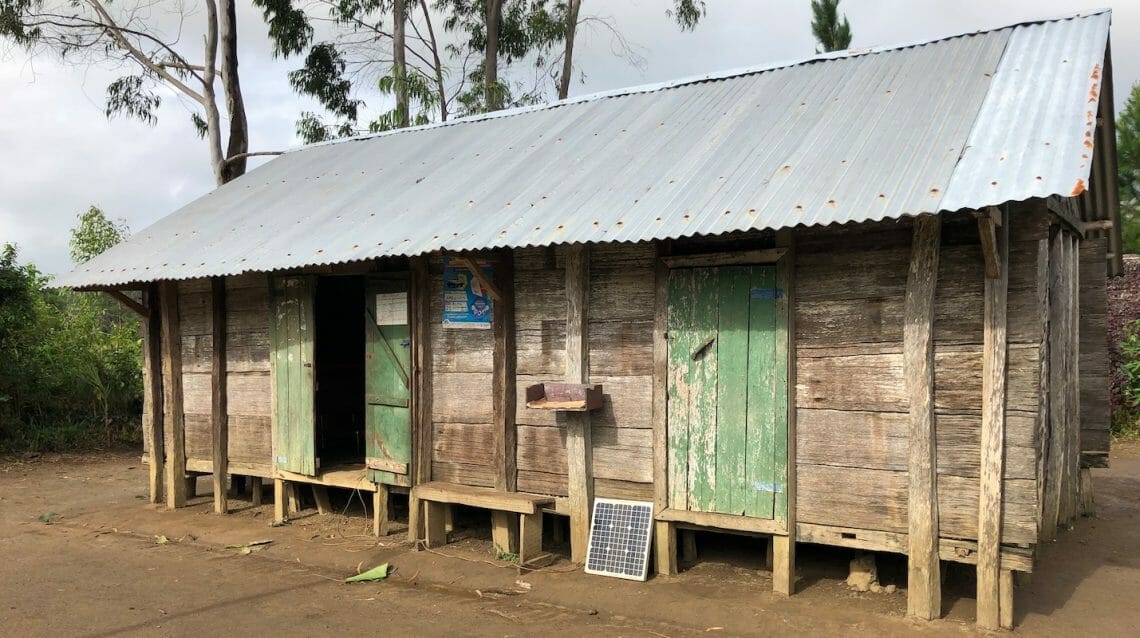 Since referrals to better-equipped facilities are difficult and often impossible, and the conditions of health posts are such that management of PPH is difficult, prevention is of utmost importance. Administering oxytocin immediately after the birth of a baby  cuts the likelihood of PPH in half, which makes it the single most important best practice.

We spoke with health workers to understand their constraints and design solutions that might work for them. We found that they underestimate the likelihood and consequences of PPH, and as a result, prioritize other concerns. Even though PPH is the most common cause of death for women giving birth, it’s still rare, and rural health workers who deliver only a few babies per week are unlikely to encounter it often. Additionally, oxytocin injection should be given within one minute of birth to be effective, but none of the health workers we spoke with mentioned this time window. They are in the habit of performing several other tasks prior to administering oxytocin. Without any clocks to keep time, regular supervision, or other sources of feedback, there is no way for a health worker to learn she is administering oxytocin too late, and no prompt for her to change her practice.

Recognizing and empathizing with this context — the absence of resources and support, time scarcity, and the mental burden of dealing with it all alone — was the starting point for our team’s effort to design a solution with behavioral insights in mind. Through iterative testing with health workers and other Malagasy stakeholders we developed a set of tools to help providers improve quality of care and reduce complications and deaths from PPH.

Real-time tools to address health workers’ challenges and save lives

One of the solutions we developed is a low power electronic timer that gives immediate feedback on the timeliness of oxytocin administration. As soon as the baby is born, the health worker can hit a large button to start a timer that counts down and beeps as 60 seconds approaches. The lunchbox-sized device is mounted on the wall so it can be hit with an elbow instead of soiled hands. The device also has the added benefit of freezing the timestamp at birth so it can be accurately recorded later—an incentive to use the timer, as it removes a reported burden of having to remember the time of birth for paperwork. In the words of one health worker: “It would be good to have the time noted for me, because sometimes I have other things to do and forget to record it. It will also help to be more conscious of 60 seconds.” Other health workers were excited about having a timer for oxytocin, but they also told us they wished they had timers for other time-sensitive procedures like malaria tests or respiratory monitoring. In response, we redesigned the timer to add flexibility and broaden its use. 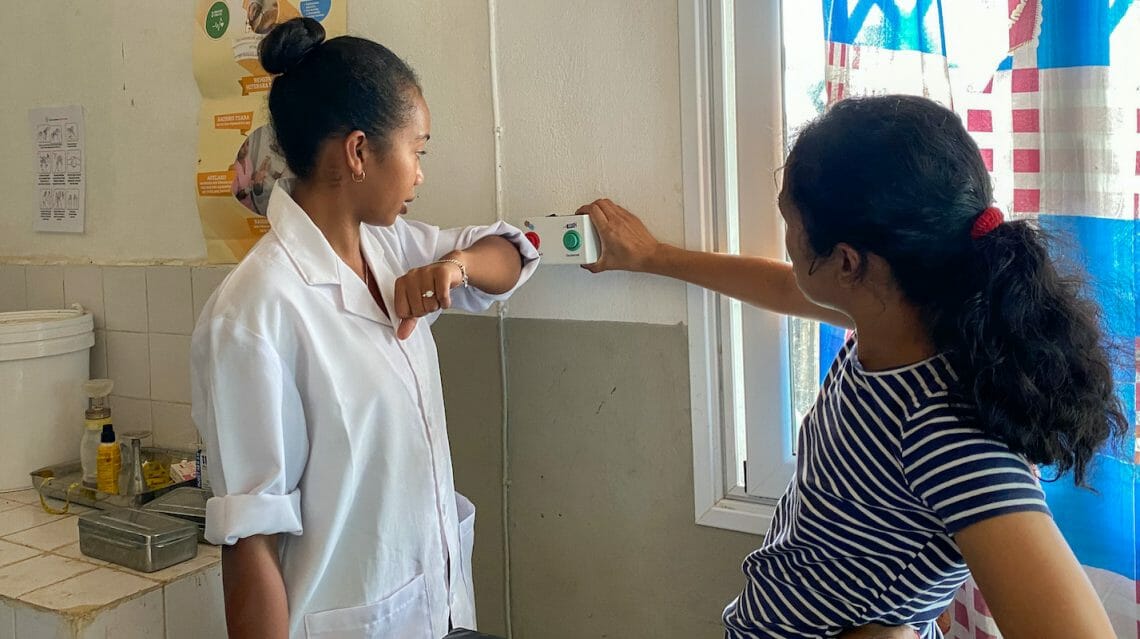 A health provider tests out an oxytocin timer prototype on the wall of her delivery room
Photo credit: Maddie Kau

We also designed a glow-in-the-dark poster with simple illustrations of how to stop bleeding, based on cause, because when PPH occurs it’s hard for health workers to remember the specific details of their training in the urgent moment, and they have nobody to ask for help. Some facilities already have a sheet with a clinical algorithm for managing PPH, but as one health worker described it: “I couldn’t use it when there is a case of hemorrhage since I won’t be able to see the content and it’s too detailed. It’s for when you have free time.” Moreover, such materials are not useful in the dark. The new poster is meant to be easy and intuitive to reference in a moment of panic. When viewing both materials, another health worker said, “I would choose the simple one because it is a brief summary with pictures. I don’t need to read between the lines. I know this by heart but sometimes I panic. I might forget something, and this will remind me. Pictures will tell me what I have or have not already done.”

The last tool is a set of seven lanyard badges for assigning tasks – like “emotional support,” “torch bearer,” or “bleeding monitor” – to the people who go with a pregnant woman to the facility. In Madagascar, it is customary for relatives, neighbors, and other community members to attend deliveries to show their support and help laboring women reach the facility. The crowd of attendees at a delivery can be overwhelming for a provider; as one health worker explained, “[the badges] would be useful because lots of family come and don’t know what to do, and think someone else is going to do something so they don’t do it themselves.” The badges help by relieving health workers of some non-technical tasks while also making the attendees feel valued and important—a win-win. A community member we showed the badges to said, “people would like getting the badges since they’ll feel proud that they’re contributing to the health of the mother.” The seven tasks on the badges were chosen by health workers to reflect the reality of their context—such as having to perform a delivery in the dark. Some tasks we originally thought would be helpful (e.g. arranging transportation in case of a referral) were eliminated through user testing, and some tasks we hadn’t thought of (e.g. cleaning up the mess the crowd of supportive attendees creates) were added. 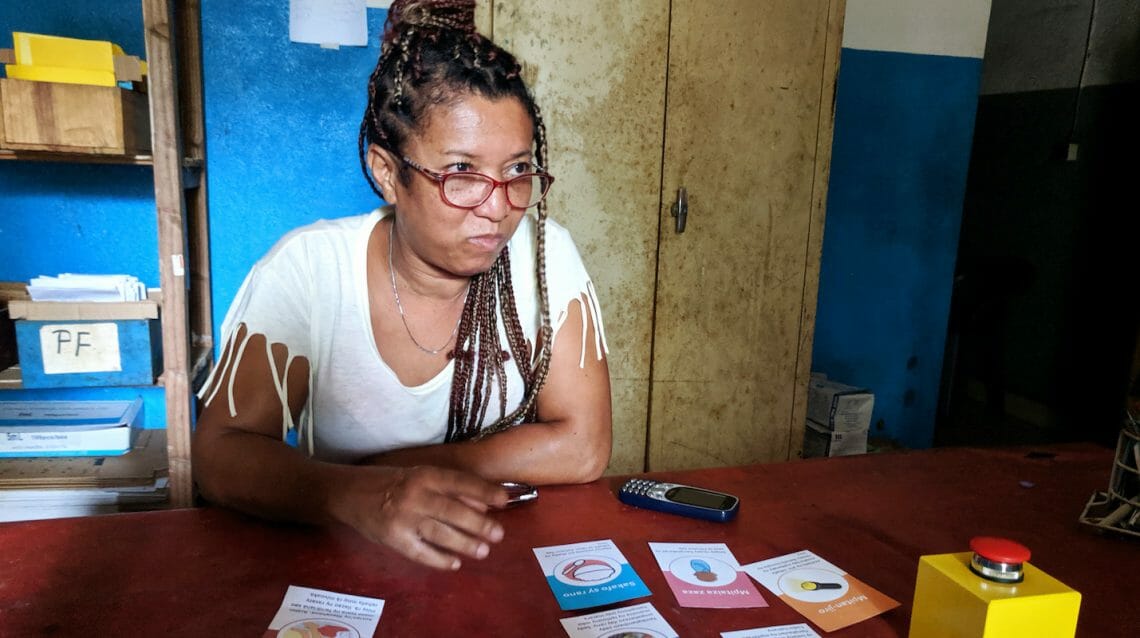 These tools are innovative because, unlike other PPH interventions, they don’t focus on training. Designed to fit health workers’ contexts and the realities of the challenges they themselves reported facing, we hope these resources will empower them to better prevent, detect, and manage PPH—the biggest risk to the lives of women giving birth in their facilities.

In the coming months we will be testing these tools further in a small-scale pilot in 10 health facilities alongside a new and innovative approach to PPH management training called Virtual Mentor, and we are excited to see how they hold up to the stress of live use.

To learn more about our approach, research findings, and full intervention, write to us at gh@ideas42.org.