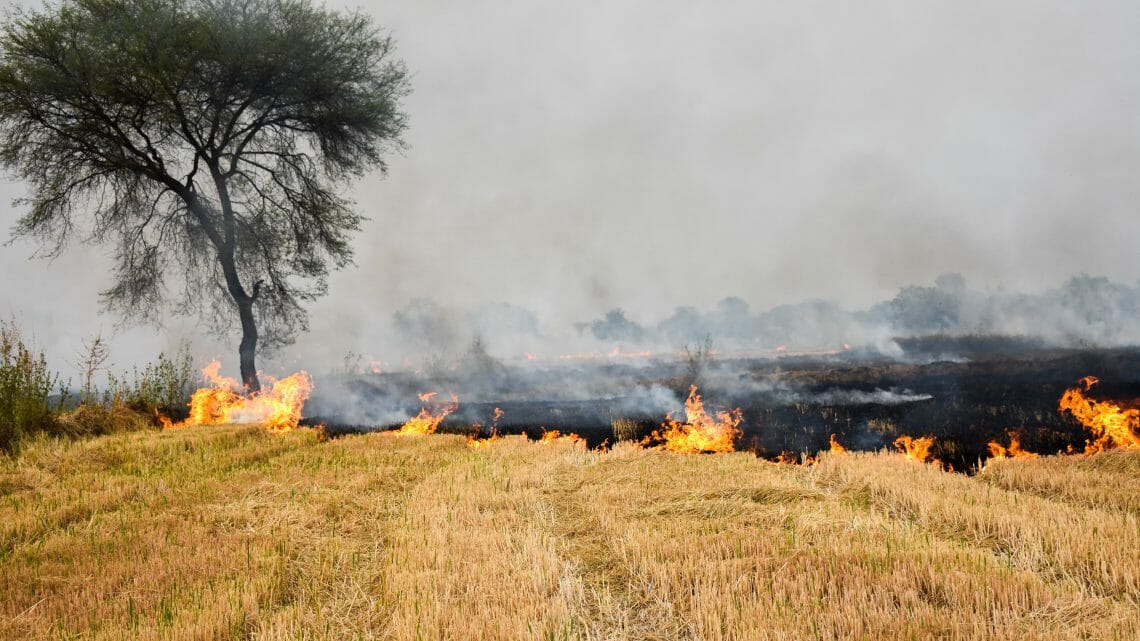 Every year, during the months of October and November, India’s National Capital Region (NCR) is engulfed in unusually thick layers of smog that disrupt day-to-day life. The area effectively slows to a crawl, with intermittent school closures, flight disruptions, construction bans, restricted driving rules and city-wide water sprinkling all commonplace. Outdoor activities are replaced by an unspoken diktat to seek refuge indoors, flanked by air purifiers and pollution masks for those who can afford  them. Beyond logistical disruptions, this annual phenomenon, what energy policy expert and writer Siddharth Singh calls ‘The Great Smog,’ creates a public health emergency responsible for an uptick in respiratory ailments and serious long-term effects like cancers and lung diseases.

It is common knowledge that a host of issues (vehicular emissions, construction dust, industrial pollutants) contribute to making Delhi’s air quality among the worst in the world year-round, but why the spike in the months of October and November?

Burning the leftover residue in the rice fields following harvest in the northern states of Punjab, Haryana and Uttar Pradesh is one of the unusual culprits. Farmers burn their fields to remove rice plant stubble to prepare for the next crop cycle, and the wind changes direction at this time of the year, bringing the smoke to the NCR which then gets trapped in the region, resulting in the Great Smog. While at first glance it seems an easy fix might be to ban the burning of rice stubble, a complex confluence of factors underlying agricultural practices and the demands of the food system for a vast population make this crisis much harder to solve.

Farmers in these three states typically grow rice and wheat on an alternating basis during the two crop cycles in each year. Rice is harvested using mechanical harvesters, which leave a five- to seven-inch-long stubble in the fields post-harvest, which needs to be cleared before sowing the next crop, wheat. Complicating matters further still, as a result of a change in agricultural policy in 2009 designed to prevent groundwater level depletion, the window between rice harvesting and wheat sowing has become shorter. Labor costs associated with manually clearing the fields of rice stubble have also risen in recent years. Faced with higher costs and tighter turnaround times on a uniform schedule, farmers resort to the cheap and quick option of burning stubble in their fields en masse.

Realizing the gravity of the situation, there have been some measures by governments to control stubble burning, but none have proven effective. Haryana has imposed penalties on burning, but enforcement has been weak. The most propagated solution in both Punjab and Haryana has been the use of the Happy Seeder machine, a tractor-mounted machine which sows wheat and lifts paddy residue simultaneously. Both states offer subsidy programs to enable farmers to purchase Happy Seeder machines and ancillary equipment, but take-up of the solution remains quite low for varying reasons. Other measures such as shifting cropping patterns and productive use of crop residue are often seen on recommendation lists among policymakers, but are relegated to ‘long-term solutions’ status and ignored in the short term.

This is a systemic structural issue involving multiple stakeholders with multiple priorities, and it is often farmers who end up bearing the brunt of the economic implications of policy edicts on one side, and blame for the environmental crisis created from massive smoke clouds on the other. But is it just a structural issue?

If we look closely, nearly every product, service, or program designed to improve outcomes for farmers around the world requires behavior change to have a real impact, and changing the approach to crop residue burning in India is no exception. Yet, the nuances of how people make decisions and ultimately take action are often overlooked in the design and creation of these solutions.

As behavioral scientists, we attempted to understand the decisions and actions of the farmer to uncover potential biases which could be at play in this process, and could inform the design of future solutions.

Farmers are focused on the present task at hand—clearing the fields quickly. Burning crop residue is the natural choice for the farmer as it provides the immediate benefit of clearing the field very fast at almost no cost. As a result of present bias, our human tendency to overweight short-term benefits and discount future costs or benefits, farmers do not see the need to consider any alternative to stubble burning.

In the face of having to make quick tradeoffs, the instant gratification of making their rice fields ready for wheat planting in a tight window then takes precedence over any concern for harm from burning to the soil’s long-term productivity or their own future health due to the smog.

Scarce cognitive bandwidth to consider a new, hassle-filled method for field preparation means that farmers stick to the easier status quo. Harvesting, storing and transporting crops at the right times happens in a small window but accounts for the bulk of a farmer’s income, creating a high-stakes, stressful environment. Preparations for the festival of Diwali, which also falls during the same timeframe, and the uncertainties of weather further compound stress. This creates a condition of depleted cognitive bandwidth, or mental space and energy, leaving a reduced ability to think about, choose, and plan an alternative method for removing rice stubble at a time when they also need to prepare the field for the next crop immediately after. Procuring a new technology and learning its mechanics, going through the administrative processes of claiming a subsidy for the costs, and figuring what to do with it for the rest of the year is a process seemingly full of hassles.

Farmers see others burning residue as the social norm, since hardly anyone uses Happy Seeder – Farmers see most of the other farmers around them burning crop residue, establishing and reinforcing a social norm that serves as a cue for how they should remove their own residue. Farmers have not seen adequate social proof where others have visibly gained from using the more expensive Happy Seeder machine. At the same time, even a few adverse instances of leftover damp stubble after using Happy Seeder, which can cause fungus or lower wheat productivity, ends up triggering negativity bias. This can make farmers more hesitant to test a newer technology when they know burning is effective.

Farmers feel individual effort would not be enough to impact the large scale problem. As residents of the area, farmers feel the consequences of burning on their health and their fields. However, since burning is practiced at such a large scale by almost everyone across the surrounding states, there is a feeling that ceasing burning of rice stubble in their own fields alone won’t make a difference in the larger problem. This occurrence of bystander effect, or diffusion of responsibility, leads to inaction. Furthermore, there is some dissonance involved, where farmers attribute responsibility for the NCR smog to residents of cities with high levels of vehicular emissions and construction.

While there are other factors contributing to the increasing pollution levels in and around NCR, and much should be done to address them, finding feasible alternatives to crop residue burning has to be considered in an effective solution set, as it is unlikely the sources of smog could be fully controlled otherwise.

Any proposed solution to handle the issue of crop burning would ultimately require action by farmers, and any action would require a behavior change by them. It’s important to note that we know from behavioral science research that new information alone is not enough to lead to lasting action or behavior change. It is imperative that apt behavioral interventions be integrated as a part of the solutions. To design and test suitable behavioral solutions, there is a need to undertake a deeper diagnosis of the specific contexts.

There is an opportunity to both strengthen existing agricultural infrastructure and policies in India, and create new systems, tools, and products to support the adoption of helpful best practices or solutions by farmers. The health and well-being of the millions of Indian residents is at stake.

ideas42 is currently working in this area and would like to partner with stakeholders working toward similar objectives. Please write to us at info@ideas42.org to express interest.