The Power of Co-Design: Lessons Learned from Diverse Stakeholder Perspectives 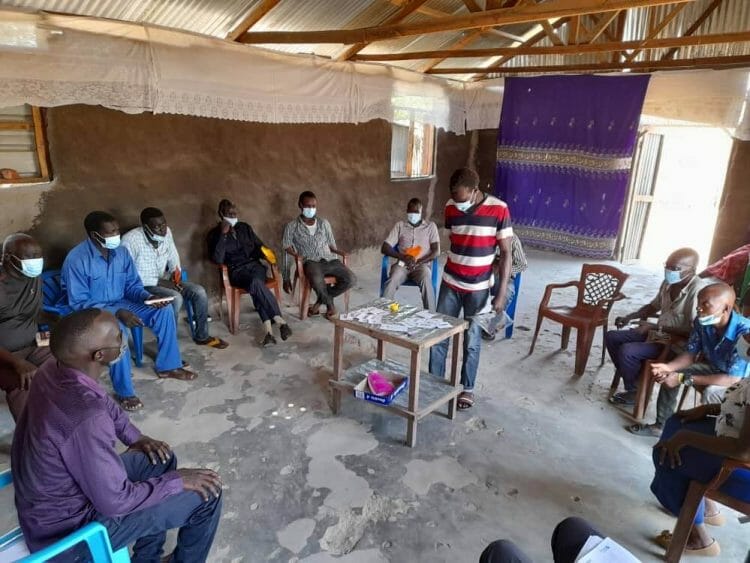 As behavioral designers, we know it’s important for end users and other stakeholders to participate in the design process for any new solution. But when a diverse array of perspectives are important, determining when and how to approach design collaboratively may feel daunting. A recent co-design process in South Sudan illustrates how stakeholders’ input, provided through different participatory design activities, can strengthen solutions and help adapt interventions to new contexts and ultimately improve outcomes for those impacted by our work.

Building on previous work in Uganda with IntraHealth International, ideas42 is supporting Breakthrough ACTION to develop an interactive game that aims to facilitate open conversation and joint decision-making among couples about family planning. Players work together as “household” teams to navigate choices for their families, see the consequences of their decisions, and learn about family planning. Several South Sudanese stakeholders have contributed to the game design, including representatives from the Ministry of Health, USAID’s MOMENTUM Integrated Health Resilience project, community-based organizations, local leaders, community- and facility-based health workers, and men and women living in the communities where the solutions are used.

These stakeholders participated in various ways, including through one-on-one conversations with our team members, participation in co-creation workshops, and playing draft versions of the game. This input was invaluable across the board, but there were three key ways these co-design activities strengthened the final design in South Sudan. 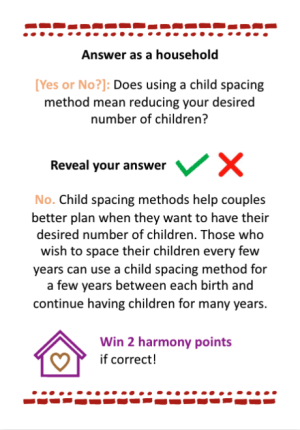 1. Program stakeholders offered insight into abstract questions of family values, status, and priorities and how to adapt the design to resonate with the South Sudanese context.

To be engaging and relatable, it was essential for the game to align with participants’ real-life priorities and with relevant norms about what makes a good parent and a strong family. Program stakeholders noted that the concept of “family harmony” resonates particularly strongly in South Sudanese communities and that men feel a strong sense of responsibility to foster harmony in their households.

Having many children is considered a source of pride, but not if parents fail to provide well for those children or if there is discord within the family. Stakeholders shared that focusing on the financial costs of children is most likely to resonate if presented as a means to build harmony, along with other factors such as keeping family members healthy and making important decisions jointly. In response, we structured the game so that players work to build household harmony and see the consequences of their choices, both negative and positive, in those terms. This was a shift from the approach we took in Uganda, in which a family planning decision-making game was framed around wealth and providing financially for one’s family.

2. In addition to sharing their perspectives and opinions, stakeholders taught us a lot by simply interacting with the game. What they didn’t say in these interactions (and who spoke when) was illuminating.

While we directly solicited stakeholder feedback, just as valuable was the more subtle insight we gained from seeing a person interact with a design. During user testing, we saw that when men and women played the game together, men would often defer to their wives to answer questions, particularly questions about contraceptive methods. Women have historically had more opportunities to learn about contraception, and both men and women tend to expect that women will know more. Men, by contrast, are viewed as decision-makers, but find it challenging to engage in conversations when they know less than their wives. Seeing women speak up is a positive sign that women’s voices and agency in decision-making are valued. But another important objective of the game is to boost all players’ comfort and confidence in discussing sensitive topics such as family size and contraception.

Seeing male players’ hesitancy to respond to knowledge questions in the game led us to add a new type of game card that provides an immediate and less intimidating opportunity for discussion between players. These new cards prompt players to discuss how they might approach an uneasy or uncomfortable situation, such as responding to a respected elder family member who wants the couple to have a child at a time that might be risky for the mother’s health. Many of the cards pointedly do not have a right or wrong answer. 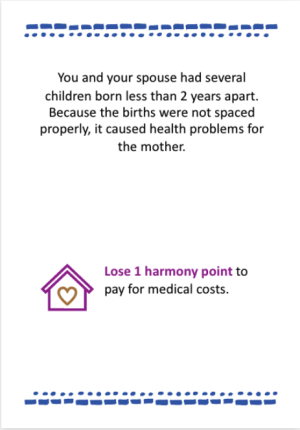 3. Contrasting feedback suggested a need for local flexibility in some program details.

Our experience in Uganda suggested that men value the opportunity to learn and explore unfamiliar topics in a “safe space” with male peers. However, government and program stakeholders in South Sudan recommended the game be played by couples to build comfort discussing family planning together and to avoid potential adverse consequences of exposing only men (or only women) to the content. We tested the game with both single- and mixed-gender groups to determine the approach that worked best. User testing reinforced the benefits stakeholders expected, but also revealed significant challenges to playing the game with men and women together.

As noted above, men were less willing to participate actively and share openly when playing the game with women. We also encountered more challenges recruiting men to play in couples; while men consistently showed up to male-only games, some men interpreted couples-based invitations as allowing their wives to participate instead of them. These different insights suggested that there wasn’t a single correct approach, and that local stakeholders might be best positioned to weigh the pros and cons for their own communities. Ultimately, we decided to encourage couples-based participation but invite local leaders and game facilitators to make the decision.

By creating the space for these diverse (and at times contrasting) views, our team strengthened the game and identified avenues to create flexibility in the game when perspectives differed. The process also affirmed the game’s effectiveness as a fun and engaging way for participants to learn about contraception and become more comfortable having conversations about the topic. We continue to leverage the power of co-design as we work in several other regions of South Sudan to further refine the game and encourage male engagement in family planning discussion and use.

Write to gh@ideas42.org if you’re interested in exploring how these approaches could be applied to your setting.